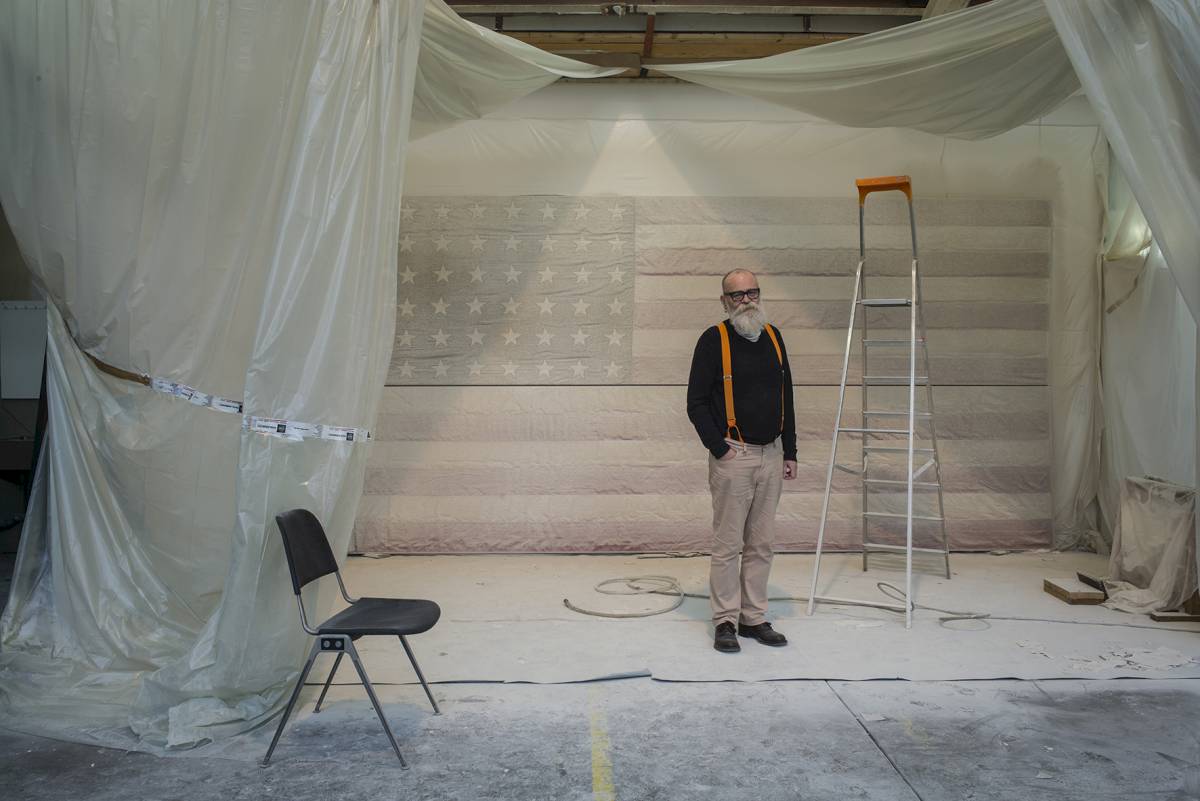 When artist A.A. Bronson was asked to participate in the BMW Art Talk „Why Berlin? - The arts and the City“ at Soho House Berlin during Gallery Weekend 2018, he surprised everyone by performing a love letter to the city of Berlin which he had writted specifically for the occasion. The letter is based on The Epistle to the Galatians by Paul the Apostle and the performance moved almost everyone in the audience to tears (including us!). Months later we were in the midst of putting together a Berlin street magazine for the homeless called KARUNA KOMPASS. Discussing the lack of positive energy in Berlin, the letter popped into our heads. This incredibly inclusive and poetic letter that had been read to people sipping champagne in a super exclusive setting. Yet we thought it was meant to be heard by every Berliner regardless of their social background. With the kind support of Esther Schipper we got in touch with A.A. Bronson who gave us the right to publish the letter in this unusual context.

»Born Michael Tims in Vancouver, Canada, at dawn on June 16, 1946; at the age of seven I turned away from Christianity to explore other paths; in the 60s I was a hippy, I founded a commune, an underground newspaper, and a free school; I was a member of the artists’ group General Idea for 25 years; publisher of FILE Megazine for 18 years; a founder and Director of Art Metropole, Toronto from 1974; an AIDS activist during the war years of the 80s and 90s; a healer and a master of butt massage for fifteen years; for seven years Director of Printed Matter, New York; founder of the NY Art Book Fair in 2006; founder of the LA Art Book Fair in 2013; founder of the Institute for Art, Religion, and Social Justice; founder of AA Bronson’s School for Young Shamans.«

To the artists, gallerists, musicians and writers who make Berlin what it is today; to the students gathered here today and especially to the students of art or of religion; a special hello to the hipster Jews from Israel and Montreal and Brooklyn; to the queer community; to the mad and disabled; to the refugees and immigrants and expats. To the Turks and Russians and Poles and Syrians and Slavs and Arabs and Iranians; to those of color; and to all the marginalized communities that find themselves today; and as well as to the living also to the dead: to the Brothers Grimm, to Bertolt Brecht and to Kurt Weill, to Walter Benjamin, to George Grosz, to Leni Riefenstahl, to Marlene Dietrich, to Helmut Newton and to Nico, who is buried in the forest of Grunewald, to Frank Wagner; to generations of Prussian witches, beginning with Friedrich Wilhelm’s edict of 1714, and ending with the murder of Barbara Zdunk, the Polish witch who was strangled and put on the stake on August 21, 1811; to the many Berlin women who became factory workers during WWI, and never returned to their homes; to the gangs of adolescent Wanderflegel or Wild Boys of the 1920s, William Burroughs’ inspiration; to the victims of the Kristallnacht of November 9-10 1938; to the hundreds of Jews who killed themselves in the early 40s rather than be deported from their beloved Berlin; to Berliners such as Peter Fechter, who was the first to be murdered in the “kill zone” of the Berlin wall; to those who lost their lives on what is now Potsdamer Platz, now essentially a cemetery (and let us not forget every time we walk through Potsdamer Platz that we walk among the dead); to all those who have been persecuted for their difference, and murdered; to those who suffered from abuse as children, or adults; to those who committed suicide because of their inability to live fully as who they felt they were; to those who died of HIV and AIDS; to the refugees who never made it to this safe haven of Berlin, but died along the way; to the dispossessed and abandoned; to all those who have died but cannot leave this place: I invite them to join us here, in this invocation of love; for we are a community of the living and the dead.

The letter was published in the third issue of KARUNA KOMPASS